How do we define atheism today? What exactly constitutes an atheist? Although I am not a believer in magical sky gods, I avoid describing myself as an atheist, which not only has a 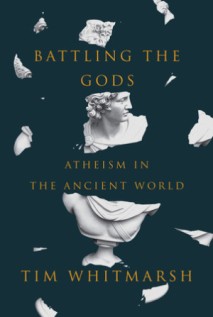 bit of an arrogant ring to it but these days is additionally burdened by the negative fallout from the militant atheism – actually “anti-theism” – of a Richard Dawkins or a Bill Maher, as of late further tarnished by blatant Islamophobia. On the other hand, agnostic sounds a bit tentative, so I coined my own term, “dogmatic skeptic,” to sum up my outlook in this regard. My point here is that while there are lots of variations of the religious experience, there may be just as many varieties and degrees of non-belief (un-belief?). Armed with a stunningly encyclopedic knowledge of ancient times, renowned Classicist Tim Whitmarsh sets out in Battling the Gods: Atheism in the Ancient World to establish that atheism is not only a post-Enlightenment phenomenon but has as well a solid foundation in the remote past.

There are problems almost from the very start. Once more, how do we define atheism? If one rejects established religion, does that establish them as atheist? Hardly.  Plato rejected the Olympian pantheon, but he believed in mysterious perfect forms and a vague supreme being, so he was hardly atheist. And we know a lot about Plato from the relatively large body of his work that has survived. In contrast, most of what we know about the rest of the ancient world is fragmentary, so much interpretation is required, and whenever possible Whitmarsh interprets to suit his thesis. What if all we had were portions of Martin Luther’s Ninety-five Theses challenging the Roman Catholic Church on indulgences? We might conclude that Luther was an atheist, but we would of course be very wrong.

I would take this one step further: there remains a heated debate in some circles of twenty-first century American historiography as to the religious beliefs, or lack thereof, of the various Founders, with some even asserting that Jefferson or Madison were atheists, and others vigorously challenging that notion. In this case, we have a vast collection of writings both by the subjects in question and by those who knew them intimately, yet much dispute remains. This is further complicated by the fact that spiritual beliefs can change dramatically over a lifetime; many become more devout as they grow older and mortality looms. A perfect example is Hamilton, a devoted Presbyterian in his youth who seemed to lose interest in religion entirely during the Revolution; he later briefly flirted with Deism (according to biographer Ron Chernow), and yet on his deathbed spoke with great passion about his commitment to a loving god.  These men lived only a little more than a couple of centuries ago, yet there remains great ambiguity.  How can we then reach back thousands of years with fragmentary evidence and make pronouncements with such certainty?

Whitmarsh takes us on an extremely well-written and often delightful tour of the philosophical and religious realms of the ancient Mediterranean in his studied attempt to turn up committed atheists, but leaves me mostly unconvinced, not because they did not exist but because after all he presents little incontrovertible evidence of their presence. The author himself hints at them more than locating them in their respective haystacks.  At one point, Whitmarsh cites the famous rhetorical flourish of the pre-Socratic philosopher Xenophanes: “Now if cows, horses or lions had hands, and were able to draw with those hands and create things as humans do, horses would draw gods in the form of horses, and cows in the form of cows, and create bodies just like they had.” Yet, on the very next page he concedes that Xenophanes, a believer in “one god, greatest among gods and mortals, not at all like mortals in body or thought,” is hardly the atheist the former quotation might suggest. [p60-61] Battling the Gods is replete with such material.  I have no reason to doubt that there were atheists at the very dawn of the human experience, but I remain unconvinced that they ever comprised more than a very tiny minority. I would also grant that this number may have been greater during the heyday of ancient Greek and Roman scientific inquiry, but if in the twentieth-first century at the height of modern science and medicine so many billions stubbornly cling to supernatural beliefs, we should not be surprised if these numbers were dramatically larger in the days when the forces of earthquakes and lightning remained objects of some great and terrible mystery.

I was a bit troubled by the treatment of Socrates in this work, whom Whitmarsh buzzes around tenuously in dozens of references.  We all know that Socrates was charged with impiety (More specifically according to Xenophon’s Memorabilia for “refusing to recognize the gods acknowledged by the state, and importing strange divinities of his own; he is further guilty of corrupting the young.”) but there is a consensus among historians that this was but a pretext to punish the great gadfly for his former association with members of the “Thirty Tyrants,” the Spartan-supported reactionary regime that came to briefly rule Athens after her defeat in the Peloponnesian War, and especially his one-time pupil, Critias, their cruel leader.  Whitmarsh makes much of the fact that the existence of the capital charge of impiety had to imply that there was a wealth of the impious, but I find him careless in failing to underscore that Socrates was hardly an example of the same.

The charges levied against Socrates, however, do raise an issue that Whitmarsh barely explores but perhaps buttresses his thesis: if you could likely be put to death simply for challenging religious orthodoxy – never mind atheism – in an unusually open society like the Athenian polis, few would advertise such proclivities nor leave written confirmation of the same. Thus, as they say, absence of evidence is hardly evidence of absence.  Susan Jacoby’s marvelous book Freethinkers resurrects the relatively large cast of agnostics that publically populated nineteenth century America, but they lived in a free society where they could perhaps be shunned but not jailed or burned at the stake.  You would hardly expect to find something similar elsewhere on the globe back then, or in such places as Saudi Arabia today.  Atheist remains a dirty word in the United States in 2016, but at least in Massachusetts you cannot be stoned to death for proclaiming yourself one.

Remarkably, while I often found Battling the Gods to lack focus and ultimately concluded that Whitmarsh failed to substantively make his case, I still enjoyed reading this book for the author’s wide acquaintance and articulate commentary upon philosophy, religion and ancient history. I would caution that some background in these disciplines is requisite in order for the reader to properly place the narrative in context, as this volume is hardly suitable for the general audience.  Finally, I would note that while I agree with Whitmarsh that atheism is not purely a modern phenomenon, I would maintain that in the past its adherents likely remained lurking quietly at the periphery, even much more so than they do today.

2 thoughts on “Review of: Battling the Gods: Atheism in the Ancient World, by Tim Whitmarsh”