Sputnik Sweetheart by Haruki Murakami is the twelfth of his eighteen published works that I have read to date. Two more beckon to me from a nearby shelf in my study. Obviously I am a fan.

Despite its complexity, I usually recommend Kafka on the Shore to those who have never read Murakami, because it is in my opinion his finest novel. I would now offer Sputnik Sweetheart as an alternative that is shorter, less convoluted and a much 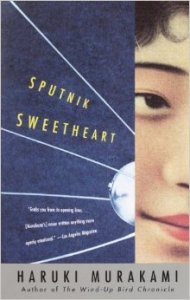 easier read yet still captures the quintessential Murakami. There is a passive, complacent male protagonist. There are well-drawn complicated female characters, in this case two of them. There are cats, or at least stories about cats. There is a passion for music, either jazz or classical. There is awkward sex and unrequited love. There is a sense of dark foreboding. There are puzzling circumstances. There is the author’s unique brand of magical realism that is trademark Murakami, although it is far less manifest in this 1999 work than it would be in Kafka on the Shore (2002) or 1Q84 (2010); still there remains a wisp of a hint of some kind of parallel universe that occasionally intersects with our own. And, in typical Murakami style, it closes with issues unresolved and questions that linger.

The title of the novel is derived from an ironic conflating of terms in an early conversation between fledgling young writer Sumire and a beautiful older woman named Miu, for whom Sumire develops a powerful lesbian attraction. Sumire brings up Jack Kerouac, which Miu comically and mistakenly places in the “sputnik” rather than the “beatnik” genre. The original Sputnik, of course, was actually the Soviet satellite that launched the Cold War space race in 1957, the year of my own birth. Sputnik is a Russian word meaning “satellite” that translates literally as “fellow traveler” and in the novel it serves as a larger metaphor with a dual significance.

I felt like I had read parts of Sputnik Sweetheart before, and it turns out that I had: certain ingredients of the novel were plucked from the pages of Murakami’s short story “Man-Eating Cats” that appeared in The New Yorker in 1991 – which ironically I had only very recently read as part of his short story collection Blind Willow, Sleeping Woman. [For my review of Blind Willow, Sleeping Woman, see https://regarp.com/2015/05/17/review-of-blind-willow-sleeping-woman-by-haruki-murakami/] The novel is actually quite different from the short story, but the elements he incorporates are both striking and memorable. This is a much shorter and easier book to read than the novel that preceded it, The Wind-Up Bird Chronicle (1994-95), or the one that followed it some seven years later, Kafka on the Shore, but it nevertheless remains as rich with complexity and nuance in its style and presentation. Since I have reviewed Murakami previously, I will not risk redundancy by restating my own personal love-hate relationship to the author based upon his brilliant prose and often frustrating lack of plot resolution. I will state unequivocally that this is one of Murakami’s best novels and one that I would highly recommend both to those who are veteran readers of his fiction and to those who are new to his work.

[NOTE: For the uninitiated, a free taste of Murakami — his outstanding 2014 short story “Scheherazade” – is available online at: http://www.newyorker.com/magazine/2014/10/13/scheherazade-3]

I have reviewed other Murakami fiction here:

Review of: Men Without Women, by Haruki Murakami

Review of: South of the Border, West of the Sun, by Haruki Murakami

Review of: Hear the Wind Sing, and Pinball, 1973, by Haruki Murakami

Review of: After the Quake, by Haruki Murakami

2 thoughts on “Review of: Sputnik Sweetheart by Haruki Murakami”