While browsing a used bookstore, it was with no little surprise that I came across a novel by Ernest Hemingway published during his lifetime that I had never read. Hemingway’s fiction cut a deep groove in me as a young man, so it was fitting that I spent the weekend 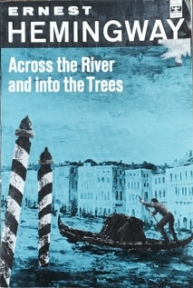 of my sixtieth birthday reading Across the River and into the Trees cover to cover. The author was not even two years older than that when he took his own life in 1961, but he was already an old man in so many ways. Indeed, it might be fair to suggest that as an artist he had aged, long before his time, even a decade prior when he penned this work.

I consider Hemingway not only one of the finest novelists of the twentieth century, but also one of the greatest American writers of all time, among a distinguished handful that includes Mark Twain, Nathaniel Hawthorne and William Faulkner. I would put Hemingway a notch beneath Twain, but perhaps controversially a notch or two above Melville. To my mind, his novels A Farewell to Arms, The Sun Also Rises and For Whom the Bell Tolls rank at the very top of the American literary tradition.  I was never a fan of African big-game hunting or the Spanish bullfighting tradition, but Hemingway’s respective nonfiction treatments of these in The Green Hills of Africa and Death in the Afternoon are not only great reads but are almost without parallel in his unique marriage of memoir and literature. And then there are the many superlative stories and vignette scraps collected in the original Scribner edition of The Short Stories of Ernest Hemingway.  Finally, there is the critically acclaimed The Old Man and the Sea; I never thought it as worthy as that which preceded it, but it was nevertheless art, even if perhaps lesser art than came before.

In contrast, Across the River and into the Trees falls far short. The book’s title is a paraphrase of the final words reportedly uttered in delirium by the dying Confederate General Thomas J. “Stonewall” Jackson, and to some degree the novel sounds a kind of death knell of its own. It was the last full-length work before The Old Man and the Sea, the 1952 novella that revitalized his reputation but yet was the last thing he turned out before his death.  He had by then left his peak as an artist to another era. Like Elvis Presley, Ernest Hemingway lived long enough to become a kind of caricature of himself and not long enough to step beyond that which, like Elvis, diminished his talent. After a while Hemingway-the-author and Hemingway-the-man became conflated, not only to his audience but to Hemingway himself. Thus, like Hemingway-the-man, the characters Hemingway-the-author crafted later in life became less authentic.

So it is with Richard Cantwell–known throughout much of the narrative simply as “the Colonel”–the gratuitously self-indulgent protagonist of Across the River and into the Trees, who comes across strikingly as Hemingway-the-man as he imagined himself to be, and then further idealized in this fictional characterization. The Colonel is fifty-one, not without coincidence the same age as his creator, and like him has vivid recollections of Italy in the Great War.  Once a general but demoted for some military debacle in the Second World War, Colonel Cantwell is in Venice five years after the war’s end visiting his unlikely girlfriend, a beautiful nineteen year old wealthy aristocrat he calls “Daughter” and with whom he carries on a not entirely platonic relationship that is also never entirely consummated. More significantly, the Colonel is dying of some unspecified heart ailment, and is making a conspicuous effort to meet his end graciously and heroically.  All of this is thrust before the reader with little art or subtlety.

Aficionados of Hemingway will often point to his spare prose, his crisp dialogue, and his use of the objective correlative–a literary device that evokes emotion in description of an inanimate object. Much of these trademarks are absent in this novel. The short sentences lack the “punch” found in his other works. The symbolism is facile, even superficial. And while most of the entire book takes the form of dialogue, it is only as a clumsy platform for the Colonel to ponder aloud and pontificate. The writing is often lazy in both style and technique: the novel is almost entirely related from the Colonel’s point of view, but briefly and awkwardly slips into omniscience when convenient. Worse, it is artificial.  As Hemingway struggles to remember the young man in the first war and to craft the older dying man after the second war, he turns his character into his own mixed metaphor, a tough guy with a hard edge and a quick fist, yet also a polished intellectual who feasts on only the finest food and wine and literature and women, all this while basking in cynicism and disillusionment yet striving to confront his mortality with his signature grace under pressure motif.  At the same time, the author’s literary doppelganger–like the real-life Hemingway–can be rude, abusive and act the bully when it suits him. Hemingway, a master of authenticity, has managed to construct a mostly inauthentic character.

But then, just as the reader is about to dismiss this work for all of its many flaws, the unique Hemingway “voice” comes through unexpectedly in a single passage and it grips you so powerfully that you are at once willing to forgive all of its other literary sins:

We met a truck at this place and slowed up, and he had the usual gray face and he said, “Sir, there is a dead GI in the middle of the road up ahead, and every time any vehicle goes through they have to run over him, and I’m afraid it is making a bad impression on the troops.”

So we got him off the road.

And I can remember just how he felt, lifting him, and how he had been flattened and the strangeness of his flatness. [p256-57]

Reading this at sixty I was struck with the same force that I was at sixteen. It is why we read Hemingway.  It is why I read Hemingway. When I finished the book, a friend asked what I thought of it.  I said: “It’s not the best Hemingway, but it is Hemingway and therefore it is the best.”